"I'm very proud of this team, we had a good start. It's getting closer to the finals matches now, I think today will be really difficult, its a home match for The Netherlands. So I think we've played well, but today is another hard match"

Louisa Lippmann
Opposite for Germany 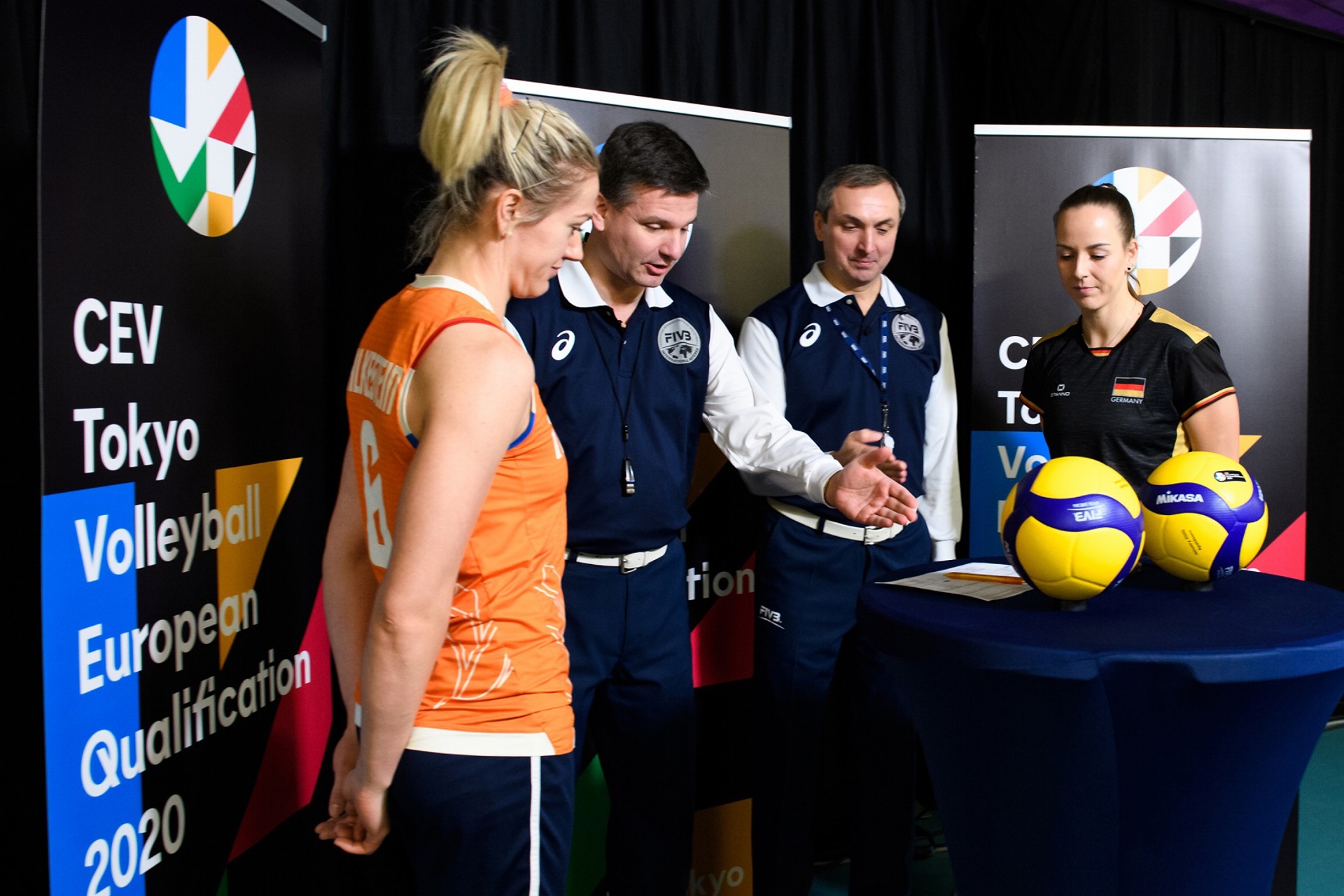 Dutch fans out in full force

Laura DIJKEMA dives for the ball

OmniSport Apeldoorn full to the rafters

Germany upset the Netherlands with a 3-0 (27-25, 25-23, 25-22) shutout in the first of two semifinals at the women’s continental Olympic qualifier in the Dutch city of Apeldoorn. German opposite Louisa Lippmann shone throughout the first set, chipping in a couple of aces towards a set total of nine points. Her team enjoyed the lead through the most part of the set, but the Netherlands managed to wipe out the four-point advantage the Germans had at 22-18 and push the set into overtime. On the third German set point, Lippmann attacked successfully for the 27-25 winner.

With opposite Lonneke Sloetjes on the starting line-up for the second set and Floortje Meijners moving into an outside spiker position, the Netherlands piled up a solid lead, which reached six points at 15-9. On a couple of strong serving streaks by Lippmann and Hanna Orthmann, Germany not only caught up, but stepped up front and then kept pace through a 25-23 close, fixed on a spike by middle blocker Marie Schoelzel after on overhead pass from Denise Hanke.

Coach Felix Koslowski’s squad had the initiative in the third set, maintaining a lead of up to three points and allowing the Dutch to step ahead in the score momentarily only twice in the set, the second time after a four-point run for 20-19. Pulling off some fantastic saves in defence when it mattered the most, the Germans reached match point after Orthmann’s eighth successful spike in the set and, two rallies down the road, they were celebrating victorious with 25-22 win after Lippmann hit the last point, her 21st in the match. Netherlands’ Nika Daalderop (15 points) and Germany’s Orthmann (14) came next on the scorers’ chart.

The number of successful point winning blocks of GERMANY compared to THE NETHERLANDS.

GERMANY number of service aces compared to THE NETHERLANDS

Errors leading to points of GERMANY, next to those from THE NETHERLANDS

"I told the team before the match, we played them two years ago, they beat us in every friendly match. 10 days ago, The Netherlands were the favourites. I told my team that, and they played freedom to play hard on every ball. THey played amazingly in crunch time situations." 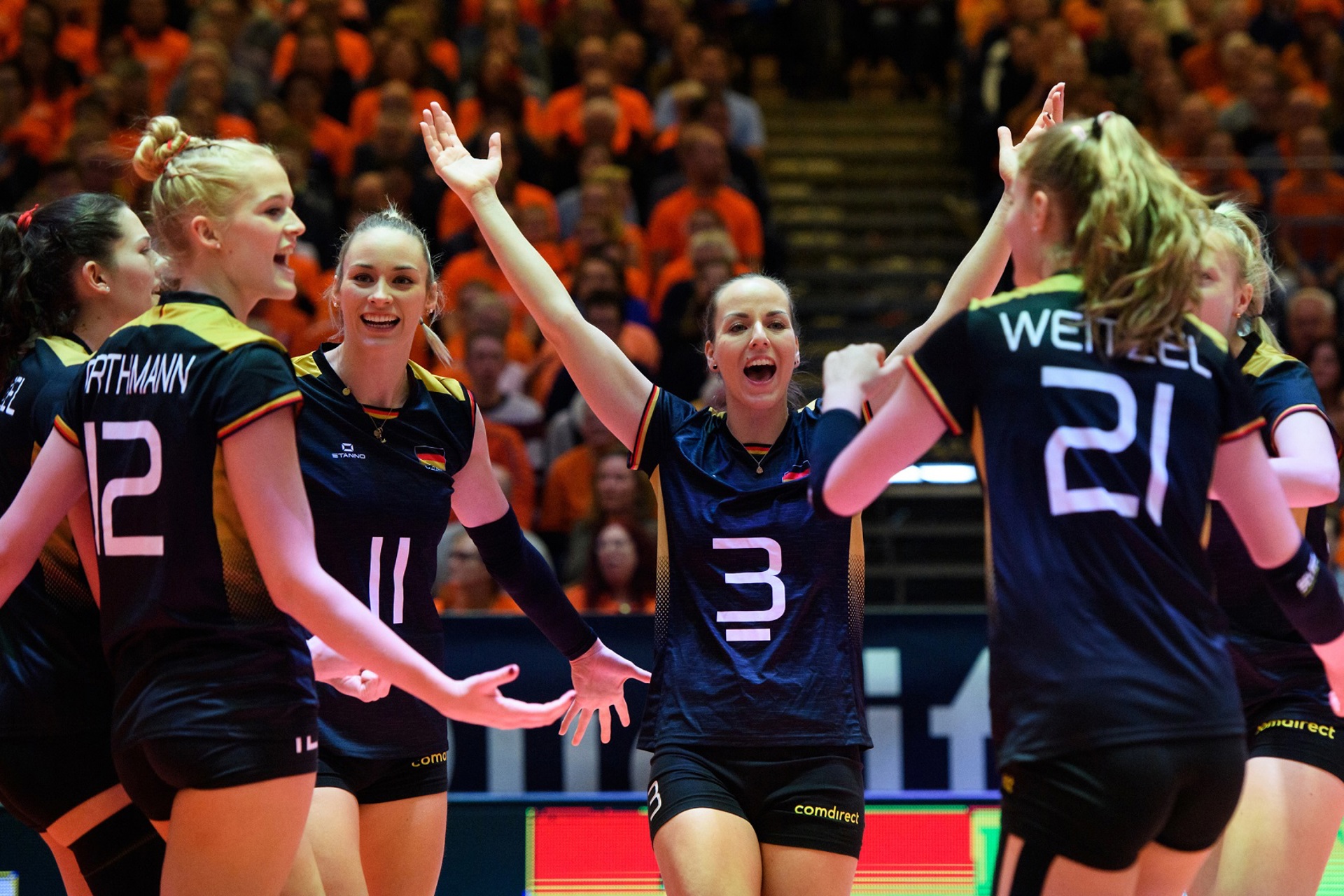 Germany celebrate a place in the final

"We lost the match, because our level was too much up and down. Our attack was good, but in the first set we made three crucial mistakes. In the second set we were six points in front, but we made I don't know how many mistakes in a row. In passing, in attack. In the third we had four opportunities to spike in transition. We played bad in defence today. If you want to go to the Olympics, you need to defend much better. I didn't see the right attitude in defence with the players."

"We did have the will to go. At times we had what it takes, but at the start of the third set we looked like afraid sheep. We just let things happen. That's not the way to play a match where a place at Olympics is at stake."