Poland failed to reach the semi-finals in the last four European Championships and this fact will motivate Poland to take some serious actions against Germany in order to not repeat that phase. Motivated by the fact that Poland beat Germany 3-1 in the 2019 FIVB Volleyball Nations League will put them in respect. Germanys road to the quarter-finals is historical. They have reached their longest run since 1990, and they have done it with spectacular play by the stars of trio Poll, Weitzel and Lippmann. Felix Koslowski, head coach for Germany will motivate the team remembering the success trip they have had up till now. ”We played really well in Slovakia. We won all games in our Pool, because we were presenting the same level throughout the whole group stage. Here in Łódź we must stay concentrated and put maximum effort in our matches,” he said. 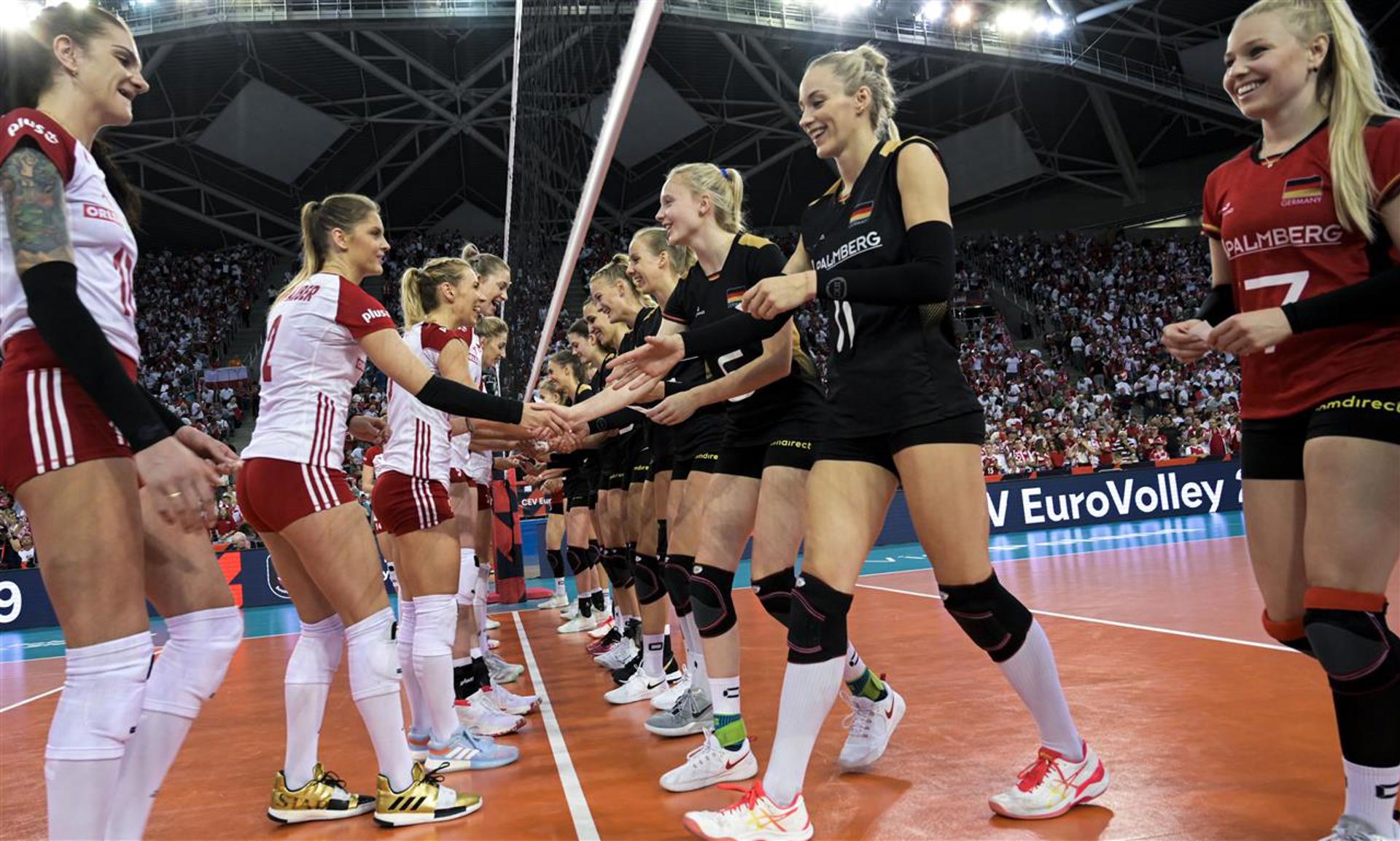 The teams shake hands at the start of the match

· Germany won their last six European championship matches, their longest run in the competition since the reunification of Germany in 1990.
· West Germany never won seven consecutive European championship matches. East Germany achieved this twice, from 1983 to 1985 (12) and from 1987 to 1989 (13).
· Germany were eliminated in the quarter-finals in the previous two European championships, 3-0 against Azerbaijan in 2017 and 3-2 versus Turkey in 2015.
· In 2013, Germany last reached the semi-finals after defeating Croatia 3-0 in the quarter-finals. They ended runners-up to Russia that year.
· Germany won 14 points from stuff blocks in their round of last 16 win, eight more than their opponents Slovenia (6). Jennifer Geerties, Marie Schoelzel (both 4), Jana Franziska Poll and Camilla Weitzel (both 3) collected these points.
· Geerties and Louisa Lippmann (both 15) finished joint-top scorer in the match against Slovenia.

Team from Germany during National Anthem

Handshakes during the match Poland vs. Germany

Team presentation during the match against Germany

Jana Franziska Poll (5) is getting ready to receive

Smarzek-Godek (17) attacks and German players try to stop it

Poland and Germany clashed in a electric arena in Łódź. And the spectators got what they wanted. Poland started as the stronger of the two teams but consistency and good serves from Germany led the Germans to overcome Poland and they gained 9 points from Polish errors in that set.
In second set Poland had the lead at 7-4 and Lippman made a fatal attack at her right wing. Poland continued to ride the success of their attacks and didn't let Germany come closer than 16 points. Nevertheless left-handed captain Hencel (GER) had a nice smash on second ball at 10-4 in fourth set. Polish team had 42% efficiency in reception and Germany 48 % over all. 19 year old Malwina Smarzek-Godek was the great star of the night with 22 points, 5 serve aces and 54% efficiency in her attacking. Poland will face Turkey for the Semi Finals in Ankara.

The number of successful point winning blocks of POLAND compared to GERMANY.

Errors leading to points of POLAND, next to those from GERMANY 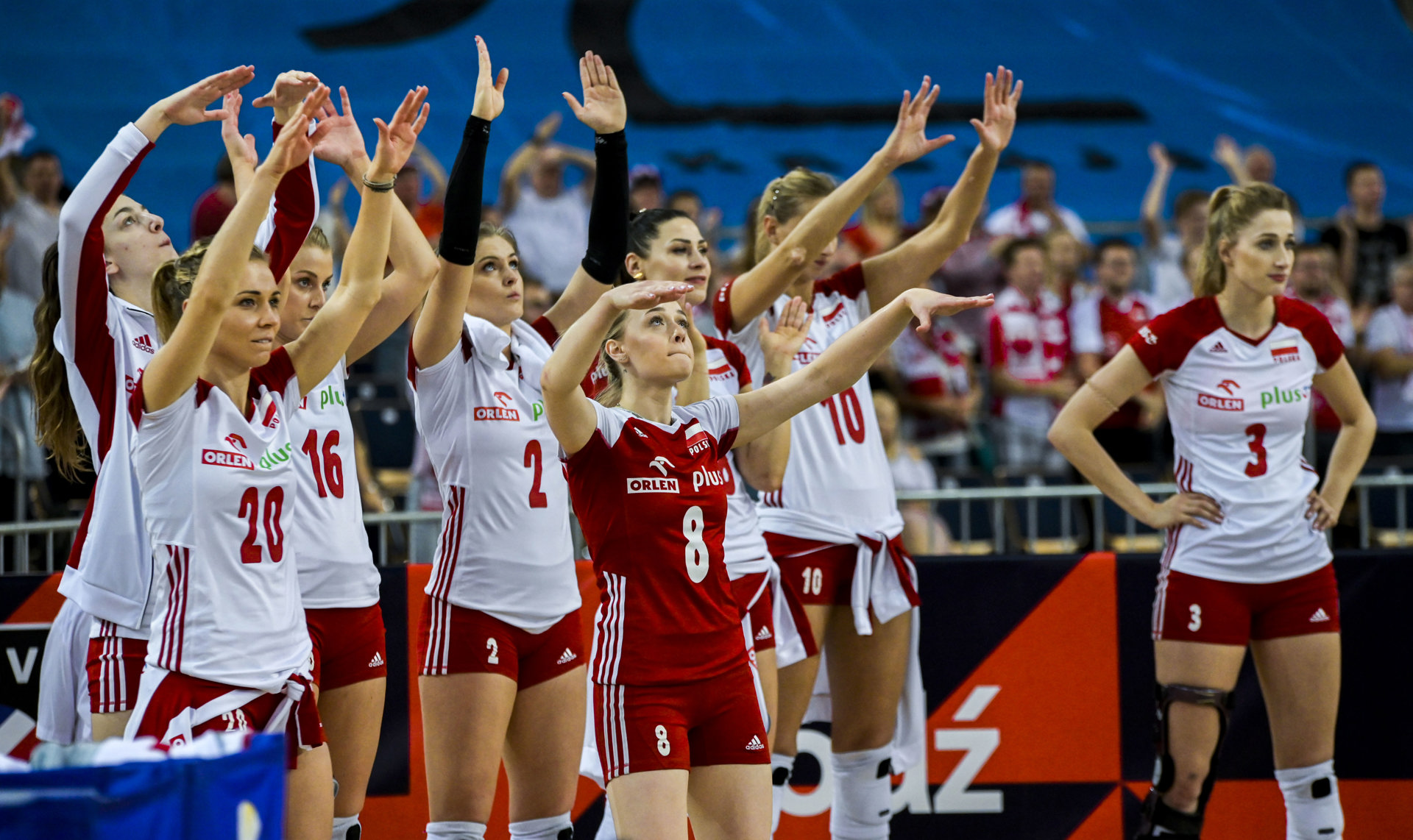 Poland signalling to the crowd

"We are going to Ankara and we will of course fight with Turkish team. We will for sure fight for medal. At the beginning of tie-break we played point to point, but we had focus on our game and improved every element. I can't imagine that we could lost this match. I played first time in front of so amazing fans, but I want more.”

"I think we made a part of our dreams. We knew that it wouldn't be easy game. I was really hard war beetwen our teams. I'm very happy that we won after very nervous game. This is something beautiful and I can't find words to describe me feelings." "We had our great parts in this game and so had the Polish team. We made way too many own mistakes in the second set, then we totally lost it with Stysiak at service. We didn't fully use all the moments when we had control over this game. I might not realize it yet because it is a tough loss but overall I'm satisfied with the tournament. We defeated Russia, played some really good volleyball and I can't wait for our next volleyball adventures."

Jennifer Geerties
opposite for Germany