The quarterfinal's encounter between Serbia and Bulgaria is a re-match of their Pool Phase meeting. Then, Serbia won in four sets, however from that time, Bulgaria managed to visible improve their game. The EuroVolley reigning champions are still undefeated in this year's edition, dropping only three sets along the way. However, during the 8th final Bulgaria led by Gergana and Nasya Dimitrova (no relation) showed their teeth and they will definitely try to make a surprise in game against Serbia. 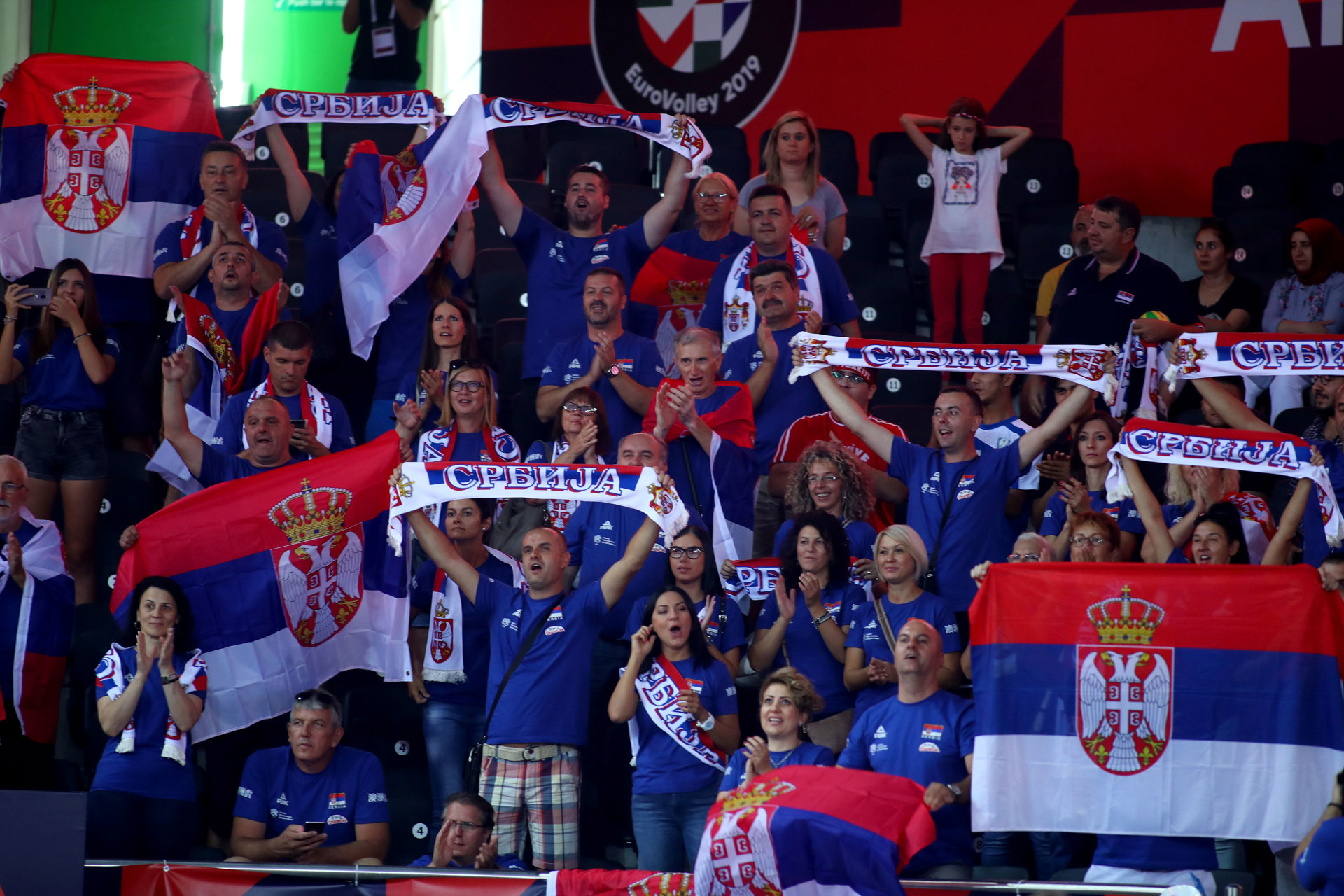 Serbian fans were out in force

· Defending champions Serbia are on a winning streak of 13 European championship matches since a 3-1 loss against Russia in the 2015 semi-finals.
· The last team to win at least 14 successive European championship matches was Italy - 18 successive victories from 2007 to 2011.
· Serbia reached the semi-finals in each of the least four European championships, from 2011 to 2017.
· Brankica Mihajlovic and Mina Popovic (both 11) won the most points in their round of last 16 win against Romania (3-0).
· Mihajlovic's 24 points against Bulgaria in the group stage are the most for a Serbian player in a match in this year's tournament. 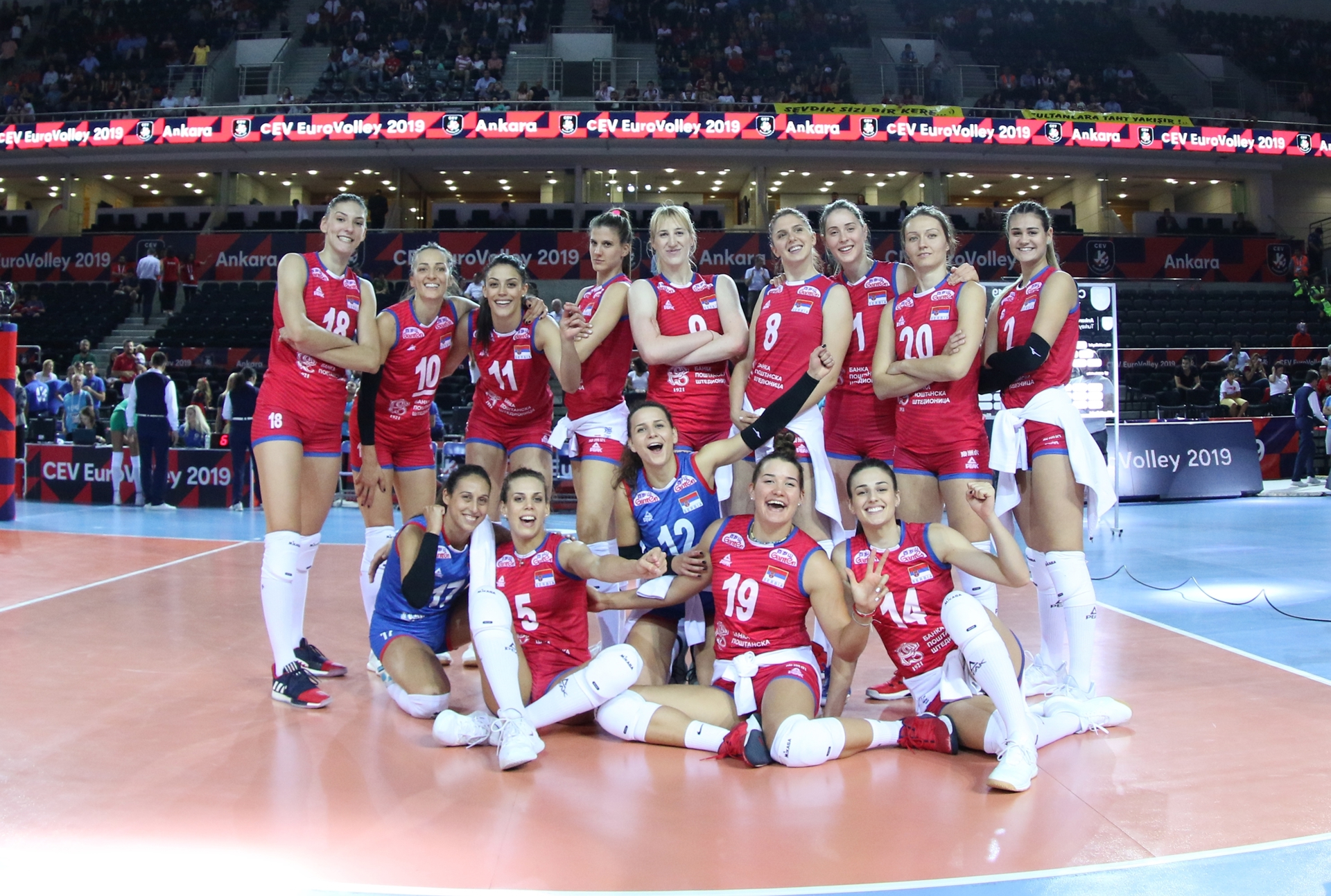 Serbia routed Bulgaria to open the programme of the quarterfinals and secure a spot in the EuroVolley semis for the fifth straight edition. Serbia claimed gold in 2011 and 2017, bronze in 2015 and finished the competition in fourth place in 2013.

In a repeat of a Pool A match, which had ended 3-1 Serbia’s way, the titleholders were even more impressive and stormed to a comprehensive 3-0 victory. Tijana Bošković set the pace for the Balkan team with 22 points.

Serbia out-blocked Bulgaria 10-5 and the Lionesses failed to capitalise on a set point in the third set – which eventually ended 28-26 for Serbia.

In the semis, Serbia will be playing Italy which won 3-1 eagerly anticipated quarterfinal fixture against Russia played at the Atlas Arena in Lodz, Poland.

The number of successful point winning blocks of SERBIA compared to BULGARIA.

Errors leading to points of SERBIA, next to those from BULGARIA

"I am happy because we qualified to semifinal one more time and we are still unbeaten. It can be dangerous as we didn't play any difficult game till now. We have to be focused a bit more. I think we will face Italy. I still can not think about this game, because we were focused on today's match. We will prepare for the semifinal after today, but for sure it will be
tough game. We will fight for a ticket to the final on Saturday and let's see which side will win."

"I regret that we didn’t fight more, we could have done it. Of course I am not happy because of this loss, playing against the world champions is always difficult. We could have done it better in the EuroVolley. I think we could have won more games and play better. Sometimes we did great and sometimes we showed a very bad performance. We should have found our rhythm in the middle of the tournament."