Slovenia took their first ever victory in an European Championships against Portugal (Pool B) and manage also eliminated Ukraina in five sets on their road to the eight finals in Łódź. Slovenia are certainly hungry for some more historical movements in this Championship. Germany, made a impressive cruise ship in Pool D in Slovakia and remained unbeaten in all group matches.

· Germany topped Pool D, winning all five of their group matches. Serbia and Netherlands are the only other countries with an unbeaten record in the group stage this year.
· Germany could win six successive European championship matches for the first time since the reunification of Germany in 1990.
· West Germany won six consecutive European championship matches once, from 1987 to 1989. East Germany achieved this on three occasions, in 1979 (6 in a row), from 1983 to 1985 (12) and from 1987 to 1989 (13).
· Germany reached at least the quarter-finals in each of the last five European championships.
· Germany lost only 40 points in their last match, the 3-0 win against Belarus.
· Jana Franziska Poll was Germany's top scorer against Belarus on 11 points, one more than teammates
Louisa Lippmann and Camilla Weitzel (both 10).

· Slovenia finished fourth in Pool B, winning two of their five group matches. They defeated Portugal 3- 0 and Ukraine 3-2.
· These are Slovenia's only victories in European championships as they lost all three matches on their previous participation in 2015.
· Slovenia could win successive European championship matches for the first time.
· Lana Skuca (22) and Iza Mlakar (21) won the most points for Slovenia in their last European
championship match, the 3-2 win against Ukraine.
· Sasa Planinsec won 10 points from stuff blocks in the match against Ukraine, more than her
teammates combined (8).

Handshakes during the match Slovenia vs. Germany

Team from Germany celebrates the score 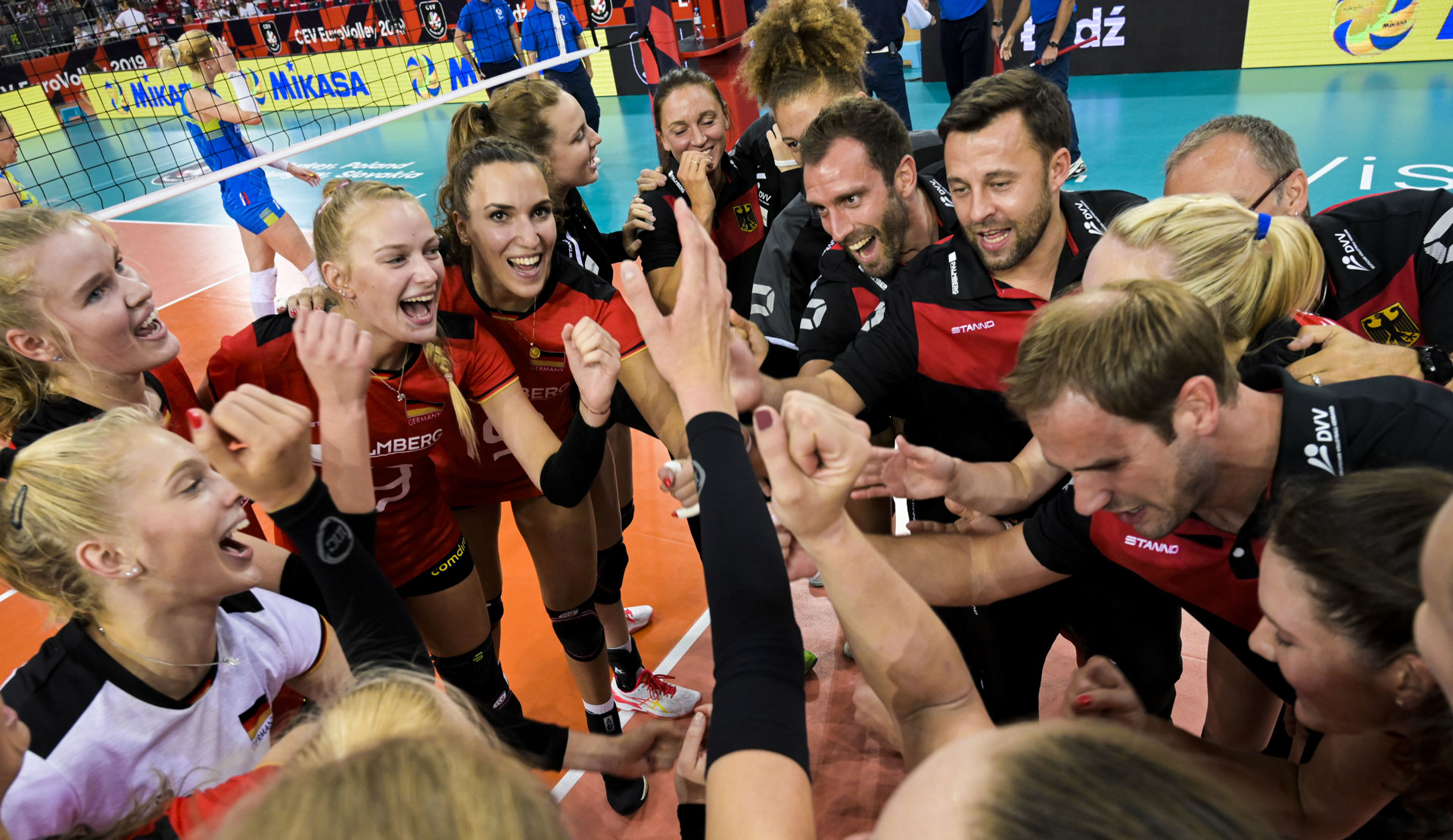 Germany celebrate after their win against Slovenia
Match Report

Germany and Slovenia was a blank spot for each other so far. They never met on an international level before. And Slovenia started with a surprise to Germany and took the lead after 12 balls in the first set, taking advantages of the fact that Germany had difficulties in the reception. But two spectacular blocks in a row by Wietsel and Poll (GER) in the end of first set was a first presentation on what the German team are capable of (6 blocks in total for first set). The second set was a different story, as Germany was more consistent and didn't let Slovenia come closer than 15 points, much due to inefficiency in attacks from Slovenia.

In third set again Slovenia took the command, but after 5 points Germany evened out and directed the rest of the set. Crucial moment in the last set were when the ball touched the hands of the Slovenian block after Louisa Lippmanns attack and coach Felix Koslovski won the challenge at 20-16 and Germany sensed the victory of this 8th Final.

Germany qualified for the Quarter Finals in Łódź on Wednesday against Poland 8.30 PM. Italy will play against Russia at 6 PM.

The number of successful point winning blocks of GERMANY compared to SLOVENIA.

Errors leading to points of GERMANY, next to those from SLOVENIA

"I'm glad we managed to finish this game in 3 sets because we saved some energy and it's much needed at this stage. Slovenians started very well in reception and were good in defence so we had to remotivate ourselves and be more focused in the next sets in order to achieve our goal" 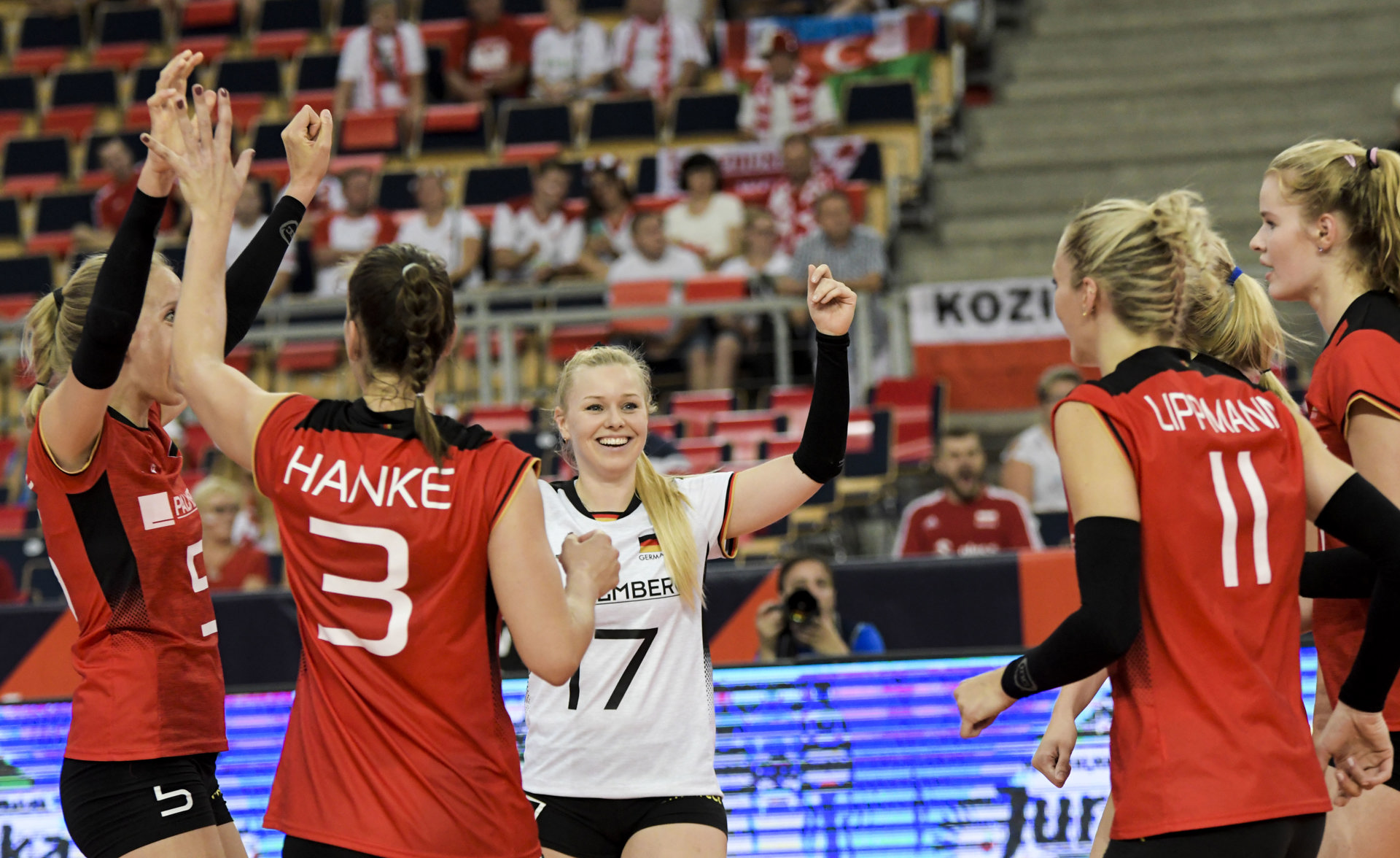 "We knew that it will be a hard game. We are young team and we have to believe that we can win with everyone. Germany team was today better than us. But we live Lodz with the feeling that we've done a good job. I hope that we will achieve more in the future"