In a remake of the EuroVolley 2017 bronze medal match, which Serbia won, hosts Belgium and the southern European powerhouse will clash in a direct battle to stay undefeated and a de facto final for the first place in the pool. The Red Dragons have won all of their four matches in the pool so far and this is their last one before the eighthfinals, while the Serbs have claimed three victories so far and have one more game to play on Thursday, against winless Austria.

“Now that we’ve reached our goal to be first or second in the pool, but now we want beat the strong team of Serbia, because it would put us on top of the final standings, but, more importantly, give us a mental boost before the next stages of the tournament.”

Seppe Baetens
Outside spiker of Belgium

“For sure it is very important for us to take the first place in the pool. We came here to win every single game. This will be a difficult match against a very strong team, supported by a lot of Belgian fans, but of course we will do our best to win.”

Uros Kovacevic
Outside spiker of Serbia 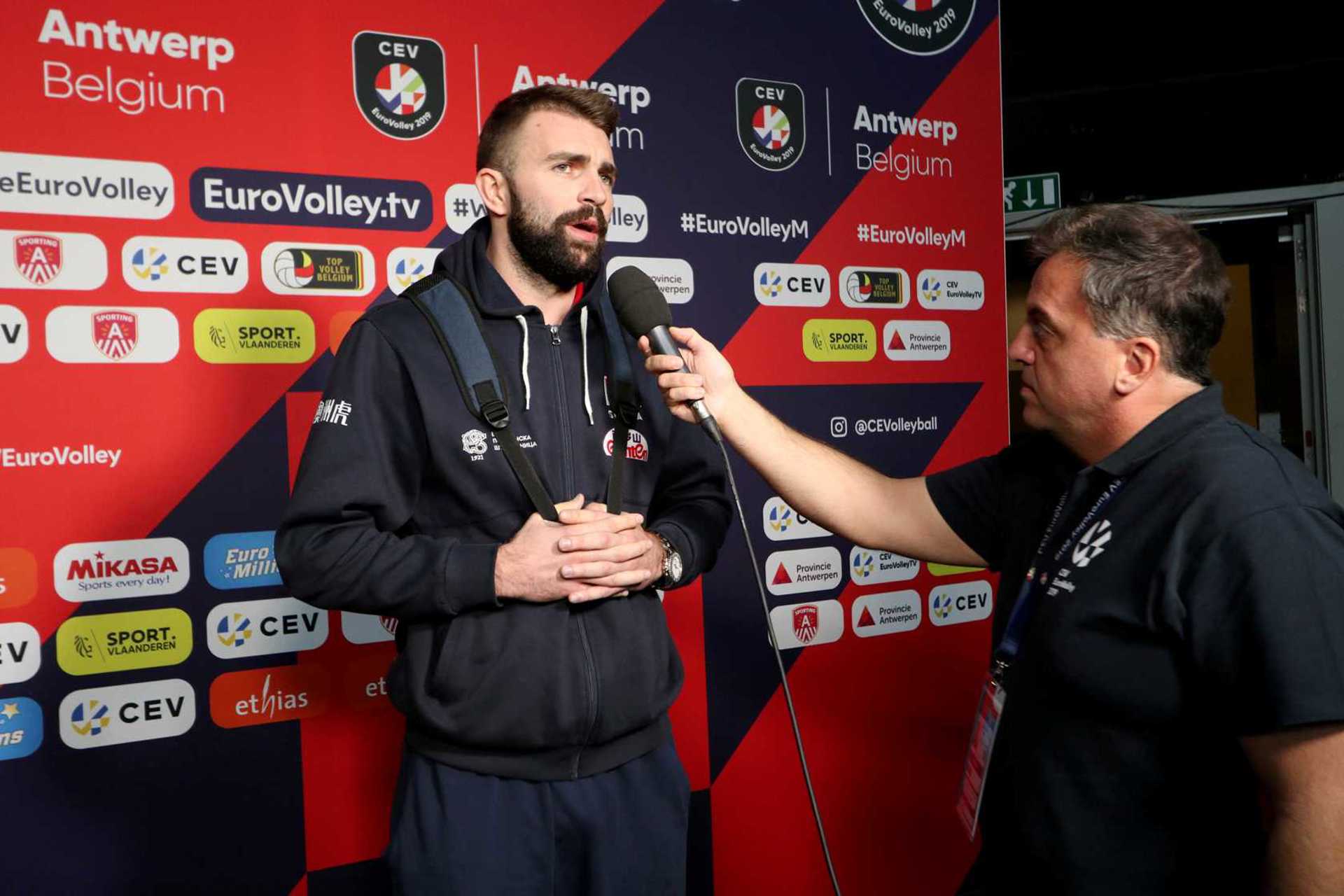 Kovacevic (SRB) in the mixed zone

Deroo (BEL) squeezes the ball between Podrascanin and Jovovic (SRB) 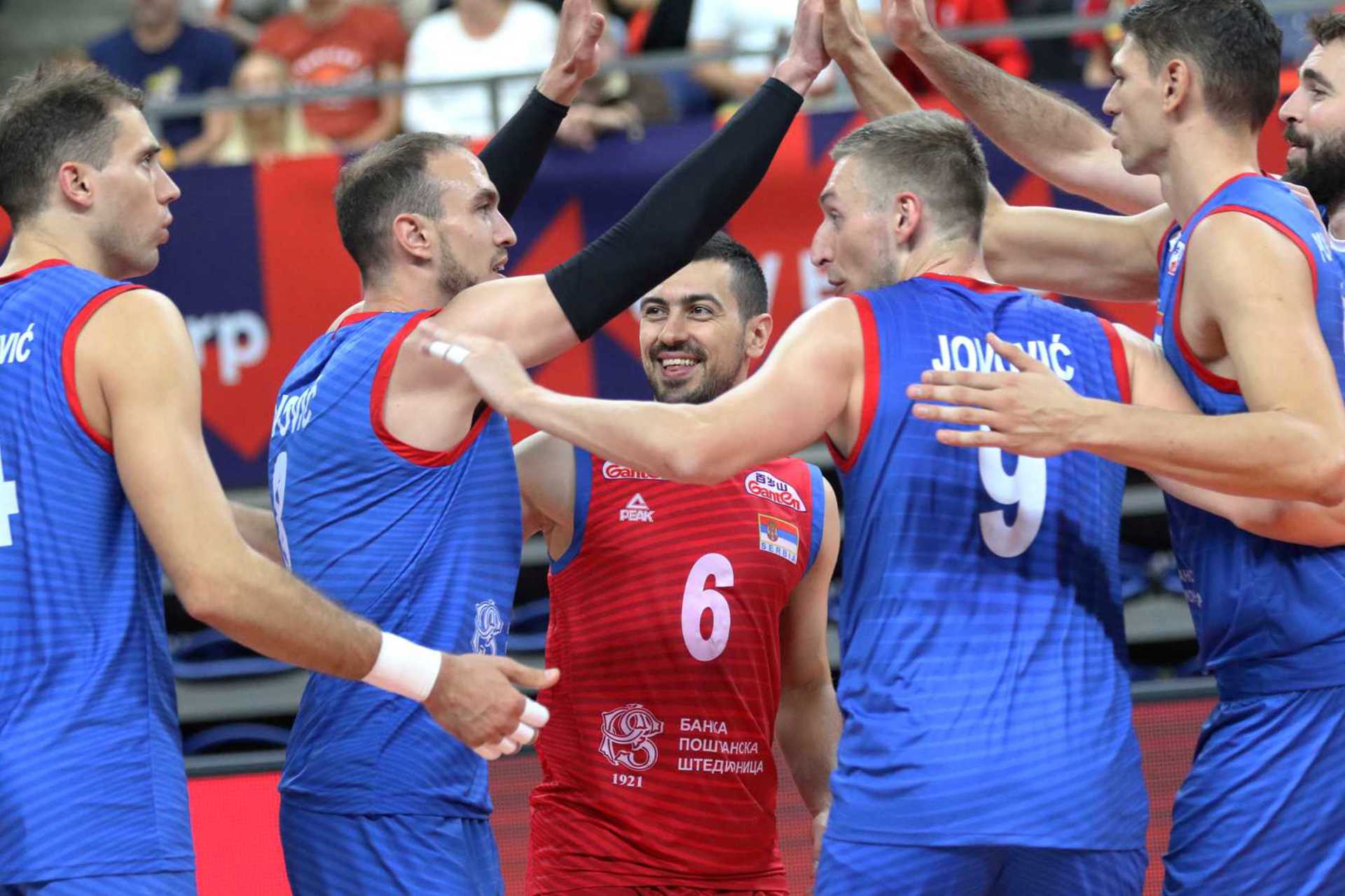 A great Belgium was outplayed by an out-of-this-world Serbia in a spectacular three-setter at Antwerp’s Lotto Arena on Wednesday. Masterfully led by setter Nikola Jovovic, the Serbs claimed their fourth win of the tournament and secured the top spot in the pool’s final standings a day before their last pool match with Austria. The host finished on a 4-1 win-loss record in second place.

With some fantastic actions on both sides of the net, Serbia’s spikers were way more productive in the first set and gave the Balkan team a 25-19 advantage. The situation did not change much in the second set, although Belgium managed to take a momentary two-point lead at 13-11. Well conducted by setter Nikola Jovovic, the Serbs quickly regained control and shot forward to a 25-21 close. With several changes in the starting line-up for the third set, Belgium maintained an early lead for some time, but Serbia quickly adjusted to turn things around to a 25-19 win, with eight points by high-flying Aleksandar Atanasijevic alone in the set.

Atanasijevic became the best scorer of the match, with a total of 18 points to his name. Captain Sam Deroo led the Belgian scorers with 13 points.

The number of successful point winning blocks of BELGIUM compared to SERBIA.

Errors leading to points of BELGIUM, next to those from SERBIA

“I had nothing to lose, when I joined the Red Dragons in the second set. I must grab the chances that the coach gives me. I tried to help the team, and I am happy that my attacks were successful. Serbia were very strong today, but we’ll try again to beat them next time.”

Igor Grobelny
Outside spiker of Belgium

“This was an important victory. I am happy with the good result. But this first place means nothing. It is possible that we meet the Belgian team again in the quarterfinals. That is why the game of today is important for our morale and our confidence. We did a good job.”